Airbnb in Edinburgh: How to make money (even when Fringe has finished!)

Working as the official Accommodation Partner for the Edinburgh Festival Fringe in 2015, Airbnb opened up a hosting goldmine that has continued to boost demand into 2016. Hosts can reap the benefits of thousands of tourists and performers descending on the city, while also helping to support local business in the area.

What happens, though, when the dust settles and the city returns to normal? It is a common misconception that the Festival is Edinburgh’s only opportunity for hosts to make the most from their vacant home, but the returns are actually strong at multiple points across the year. 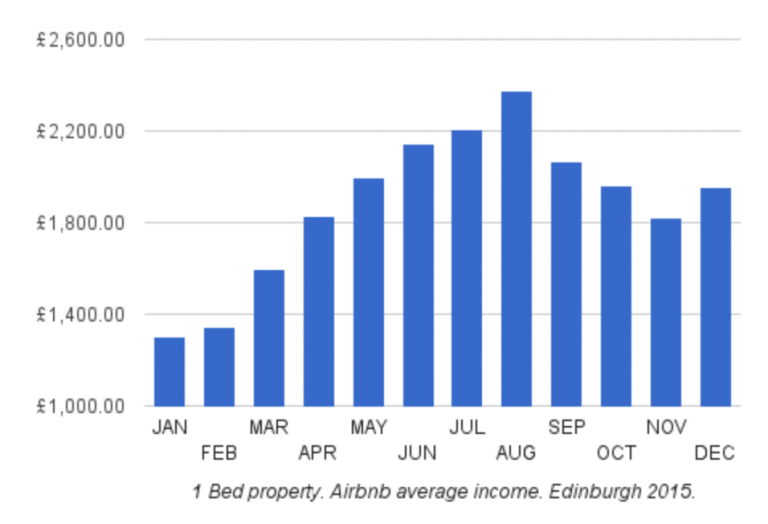 According to recent data, although August is clearly prime time with hosts generating an average income over £2,200, other months can generate significant income too.

Edinburgh is host to activities and events in every season. During Winter, Hogmanay takes over the city with some of the world’s largest and most vibrant New Year celebrations, offering an opportunity for the savvy host to take in guests from around the world. The down season begins to pick up with the Six Nations Rugby between February and March, and in June film fanatics descend on Edinburgh for the International Film Festival. Many other cultural and sporting events take place throughout the year, and ‘business ready’ hosts will benefit from a consistent influx of corporate travellers.

With such a buzz of activity throughout the year, it is no surprise that Edinburgh is Airbnb’s 9th most expensive city, proving that hosting opportunities extend far beyond the Fringe.

Are you an Edinburgh-based host already, or are you new to Airbnb and interested in hosting in Edinburgh? Unlock the value in your home and try our clever calculator below to see how much your home could earn you!

5 of Edinburgh’s most incredible Airbnb properties

5 Things I learned at the UK’s Largest Landlord Conference

Get an instant estimate